What is the Pen-grip range?

What is the Pen-grip range?

The Pen-grip range are our series of ultra-light and portable pen-grip mice. First introduced with the 300 series in 2011, they have since been refined over two generations to the current ProPoint and its siblings TRACPOINT, PadPoint, PenPoint, and GoPoint.

All mice in the Pen-grip range are easily the best travel mice ever, but they are also fully featured and genuinely ergonomic. So are more than viable as a complete replacement for your standard mouse as well.

The features that come with all pen-grip mice include:
Features available to all models except GoPoint

Each model also has a different set of features which make it ideal for specific users. Check below for a brief summary of what each mouse brings to the table.

At the top of the Pen-Grip range is ProPoint, which includes all of the features from the other mice in the range, along with a third mouse button which only shared with SurfacePoint (all other models only have two buttons). Its included USB charger also doubles as a wireless receiver which can be used when Bluetooth is not available.

TRACPOINT is for any frequent traveler who needs a portable mouse to get real work done on the go. It replaces the frustrating trackpad and also doubles as a presenter device for PowerPoint, or other presentation software.

PadPoint is for iPad users who feel limited by the touch-screen. With iOS 13 it can be used across all iOS apps, but it also features bespoke support in our partnered remote desktop apps. Which enables the full mouse support which is required to efficiently work in desktop applications on iPad.
We also have our own iPad app, which allows you to adjust key settings on PadPoint and ProPoint while they are used on iPad.

PenPoint is focused on the ergonomic and health aspects of the Pen-grip design. It expands upon these by including health software to help users avoid pain or discomfort while using their mouse.

GoPoint provides the basic pen-grip features without tilt gestures, or support for the parking spot accessory, but at a lower cost. 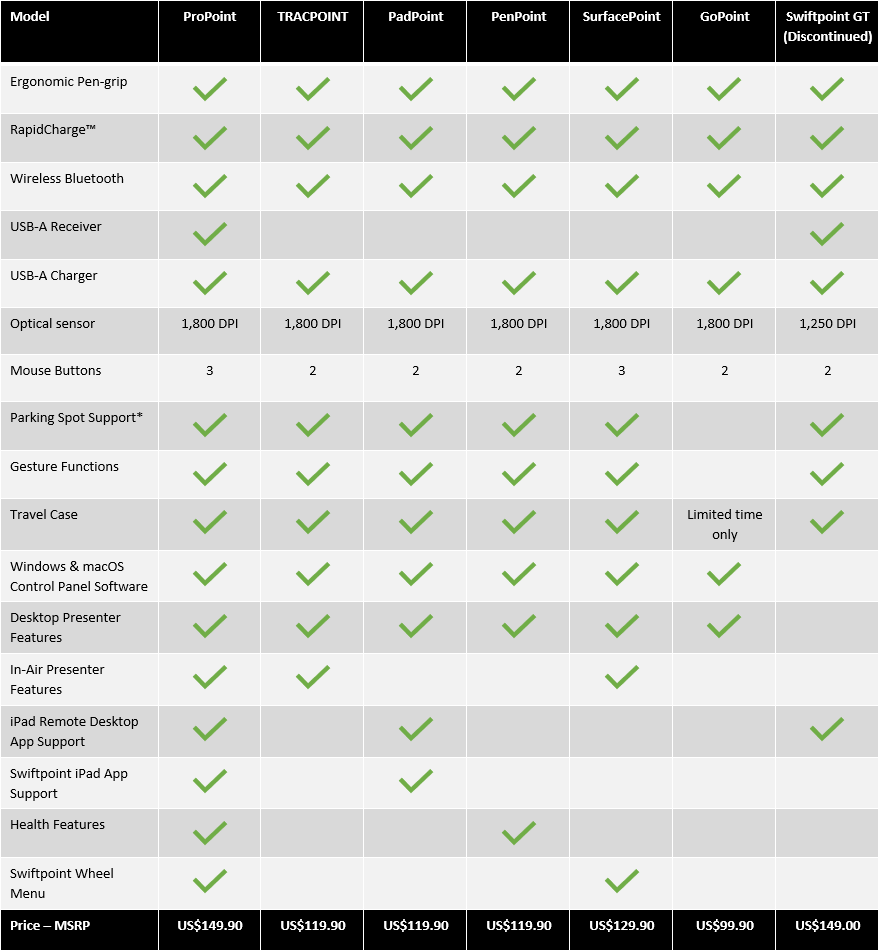 * The Parking Spot accessory (available separately) requires a magnet in the base of the mouse to hold it in place. GoPoint does not include this magnet so cannot be docked on a Parking Spot; though it can still be docked on the USB charger.